Moving the idea from Gestalt to Concept 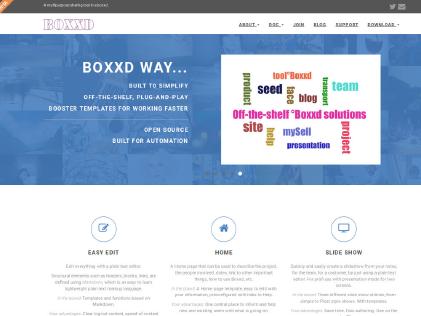 Today, in the early hours of the morning, boxxd.org went online.

A boxxd (spoken as “box”) is lean work and lifestyle app ‘out of a box’ which can be used on any device.

Boxxd is one of my projects and I am pleased to have moved the idea from the stage “fragma” to “concept”.

A boxxd (spoken as “box”) is lean work and lifestyle app ‘out of a box’ which can be used on any device.

It runs without any special software or editors.

Based on plain text and Markdown syntax for presentation logic, a user can easily create documents, idea lists, notes, navigation pages, slideshows - to be shared, to be read in a browser - and spend more time being creative.

Boxxd started off as a digital container for the organisation of work and the creation of documents - as a sort of lean workers “Swiss Army Knife”.

During the development it became clear that it “can be” and “should be” extendible.

Boxxd is now a portfolio of solutions based around boxxds, such as an office in a boxxd, or an ebook, helping people and teams to be more productive.

This site is built using a boxxd.

Several years ago I had the impulse that I should do something with boxes as a concept. I registered the domain boxxd.com around 2004, thought of doing something with it, but nothing came out of it - until 2017, when it just flowed and flowered.

The site has boxxds to download, has documentation and components to build and hack your own boxxd.

What's on this page